CLUB AUTOMATIC (CA) events are multi-layered live performances. The layers – for example vision and sound – are tuned and twisted by technique and choreography. Technique links all actives – including the audience. Choreography gives the basic timing and sets the ‘hot spots’.

Accordingly, CA events function like an interactive program rather than a stage-production. They integrate all circumstances – people as spaces; some in its pre-setting, some during the course of the happening. Just like the clubs we know, CA is a system made for (inter)active moments. But here it is not only the ones allowed through human commitment, but also those triggered by machines. The result of it shows you – spectator, guest and participant – and your commitment, in the mix.

Just as for the mix in the discothèque, there are jockeys in CA. They operate mixing tables and decide which one of all the inputs take a part in the final output. Often these mixes – may they be visual or audio – create the dominant image during a CA event. However, if the focus is on other action, the data jockey builds a real time framing – mostly including input from the very action it accompanies.

Therefore the data material which goes into the mix is either pre-produced or brought in live. However, even the pre-produced images or sounds generally go back to the context of action. CA-members often record stuff on location, always relating to local circumstances and according typical means of expressions. In general, the aim is to produce a cross-over of the given (e.g. local tradition or architecture) and the new (e.g. technology or individual input).

CA is striving for exchange – the exchange of data and skills as, above all, the exchange between people. All devices serve this exchange – either through interactive means or, even more so, by producing general visions. Through the relation to local characteristics and to general understandings, particularly the visuals serve as mediators. 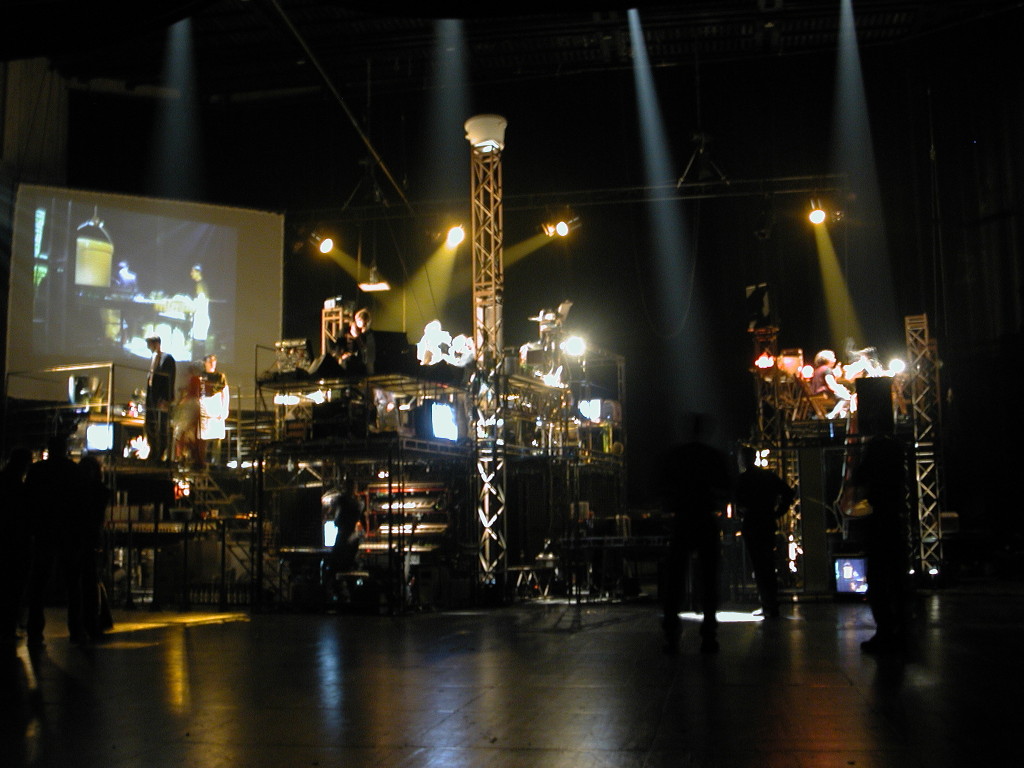 CA develops an (visual or audio) iconography which is cyclopedic. Plus, there are always images which reflect the very moment. All participants – that is protagonists and audience – find themselves being part of this information cluster, finding a universal corporal alphabet, making up fragments of the story. This is easy to grasp, since you see real reflections (e.g. yourself on the screen) and feel real connections (your image among easy to understand relating ones).

Naturally, with the images there is sound. It is generated by different devices: the usual ones as instruments or any music media player, from archives with special audio files and loops, or by one of the real time recording tools, as those going with cameras or individual pick-ups.

As described in context of the data jockeys, there is one (or two) persons receiving every sound being generated. In result, the final mix can be understood as an orchestra (of things, if you want). However, CA emphasizes ‘real’ music in their performances. Therefore there are always live musicians or bands as well as DJs involved in the program. However, even their songs may become part of the ‘greater’ composition.

Working as a sum of many ‘small’ performances, you can see CA events as one large performance or a social sculpture. Anyways, particularly through the co-operation with local artists and artist groups, there are always ‘real’ performances involved, which can be read in the basic meaning of the term.

This includes singers and music groups, dancers and other body expressiveness, machine artists and action painters, as well as so many others. Through their means every CA receives its unique expression, because when you look for special character and aesthetics of a certain region, it will always be the human feeling and its artistic translation, which can give you an idea.

Looking over massive media hardware, CA covers inherent needs – not only through comprehension of human input, but with fine cuisine. And since food is the only item triggering all senses (even audio, as you may read below), front cooking builds the heart of CA performances. 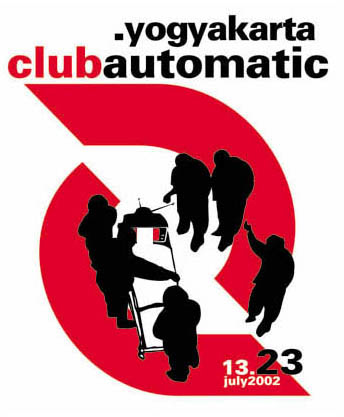 Depending on size and (naturally) budget of the regarding CA event, the kitchen supplies make a significant part in the installation as such. And as the CA network likes to technically link all actions, also the kitchen tools are plugged. Just imagine a kitchen-aid mixer being equipped with pick-up microphones and connected to the sound mixer.

Feeding an audience of a few dozens or even a few hundred people, calls for a major job – the chef cook. Since CA does not perform at restaurants or convention centers, he is in charge of absolutely everything which goes with a multi-course dinner.

He has to create the menu, investigate places to shop the specific ingredients (particularly when abroad), find all missing hardware (such as powerful burners or just tons of dishes), build a team for all preparations, install a temporary kitchen, choreograph the courses and supervise the whole setting.

As the overall choreography, the cooking goes with main settings. This can resort to local settings, regional characteristics, on-location features or ‘just’ artistic decisions. Every CA performance works with topics and key items which are then also found in the kitchen.
Imagine a space on different levels, e.g. an old warehouse and a happening which takes you through the different stories by a program which starts at the ground floor and ends on the roof. Each floor has its own color, atmosphere and smell. The kitchen adjusts to that. This is an easy example. However, those are the settings which work best since, with all connections and cables, complexity is coming naturally.

Tracing back traditions and social interfaces, food has always been and – fortunately – mostly still is key. Which other active rituals do we (in the ‘western world’) have but sitting around a table and enjoying a common meal?

And then, when we talk about mixing: Which kind of mix is easier to grasp (and compare) than the one of delicious ingredients and exotic spices? So, here we have the mix par excellence. Particularly so, when the chef takes his home experience and brings it together with regarding local specialties. In fact, the meals carry a lot of what CA events stand for in general. That is the transmission of cultural icons on a basic and easy to understand level.

If we watch the cook joggling with piles of vegetables, a big pot of stew, fresh fruit and all his crew, it is a close call to title him jockey. At the same time, the term should not be stressed too much. Here it really means that the cook and his paraphernalia are in the mix.

Following the aim of real-time translation of personal expression and origin, CA events connect all participating sources. Accordingly the cook is plugged, too. To be precise, there are pick-up microphones on knifes and egg-whisks. Mobile cameras capture the action. And all data goes right into the audio-visual live-mix: Food is guided through digital streams and becomes part of the elucidating media.

CA performances are complex interactive multimedia installations. It builds an interface which brings people closer – to others, the technique and themselves. The audience’ bodies become remote controls of a big picture-sound-machine.

In fact, guests of CA experiment relate technical devises to their own position and motion. They make up what you could call a corporal alphabet. For example jumping would give a more dramatic effect than waving. In dialogue with the machine, you end up finding out about your body-lyrics and body-icons. And like video games, CA devices allow upgrading of levels and entrance to ever more complex combinations.

Be interactive with the audience, the same old blues, but with new digital machinery.
The audience’s movements in the space are analyzed through a sensor system and are retransmitted and interpretated audiovisually in real time.
Few different sensors or pulsors are set in space [pickup, infrared, 3D scanner, beamer, etc]. These sensors correspond to the common functions of a remote control [play, ffw, rew, stop]. Control monitor gives the user a visualization of his action / interaction with the programme and gives him the possibility to take control of the picture and sound synthetizer. 4. The actor comes in, the dancers are hanging up in the air. The actor lifts an arm and memory X is switch on (e.g. lamp 5 goes on him). He walks on a bit and triggers 83 : memory X makes lamp X going on him and following him . Etc.

CA is a teamwork and we love to find some new fellow-member and working in close collaboration with exellent young artists and some strange local personage. It´s also a way to create a group of local collaborator well informed about our aim. CA is about creating a mood and everybody involved in the CA performance has to be consciousness and consistent.
Always CA leaves some space for others to join in, provide room for the mind, a open framework. 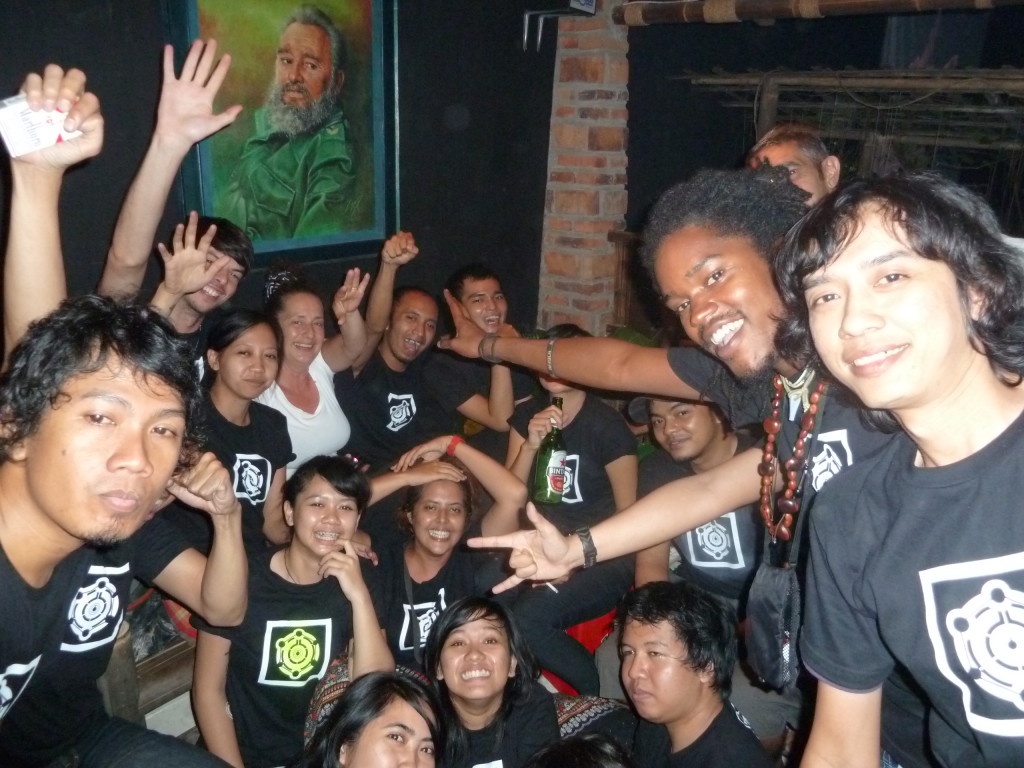