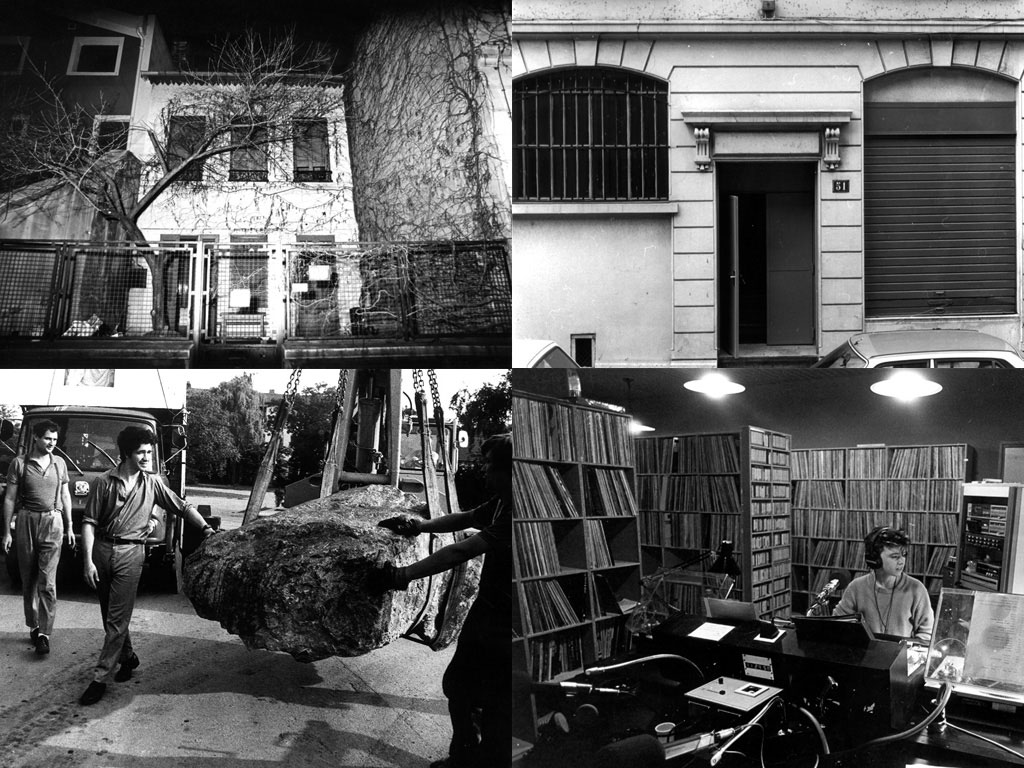 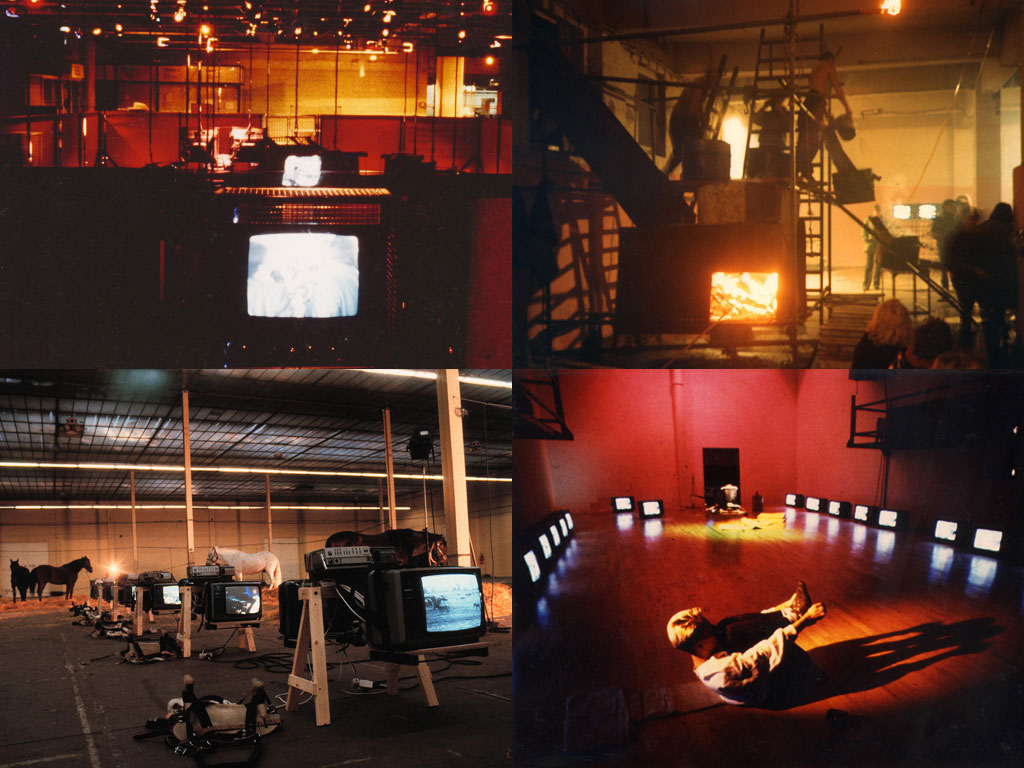 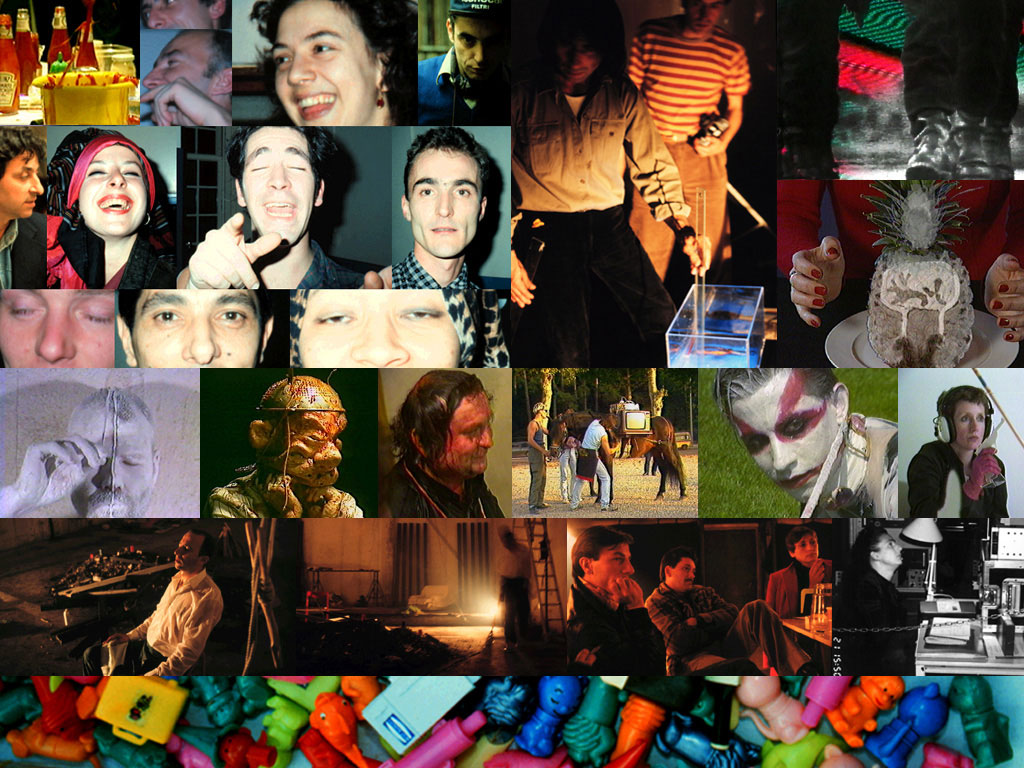 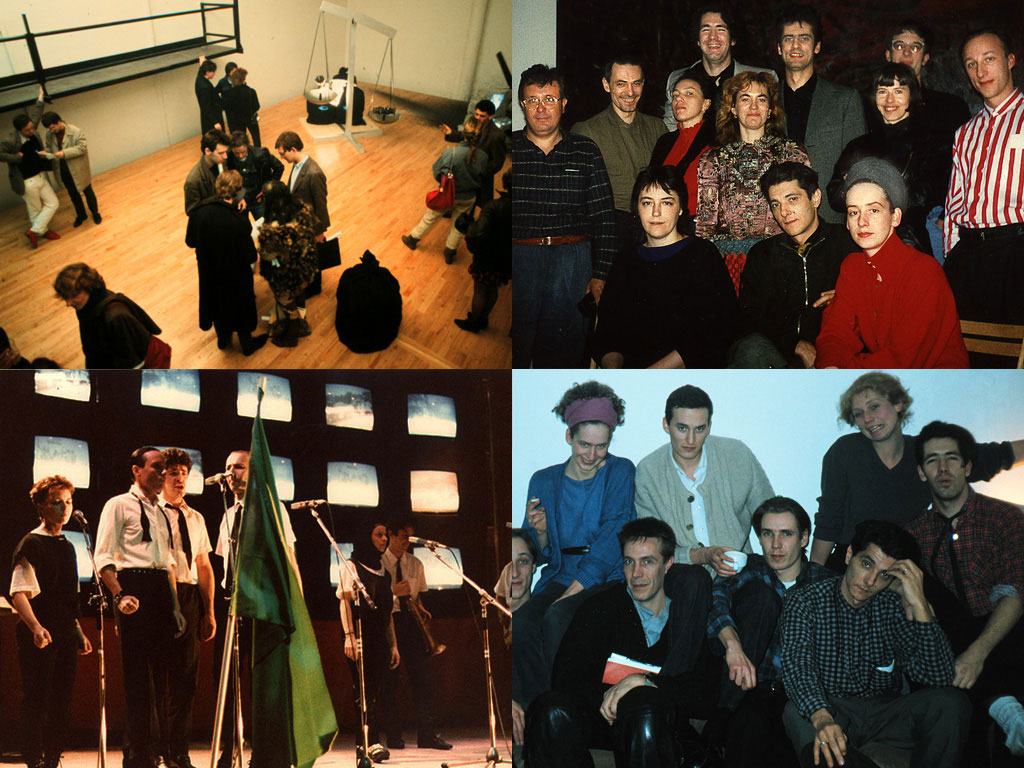 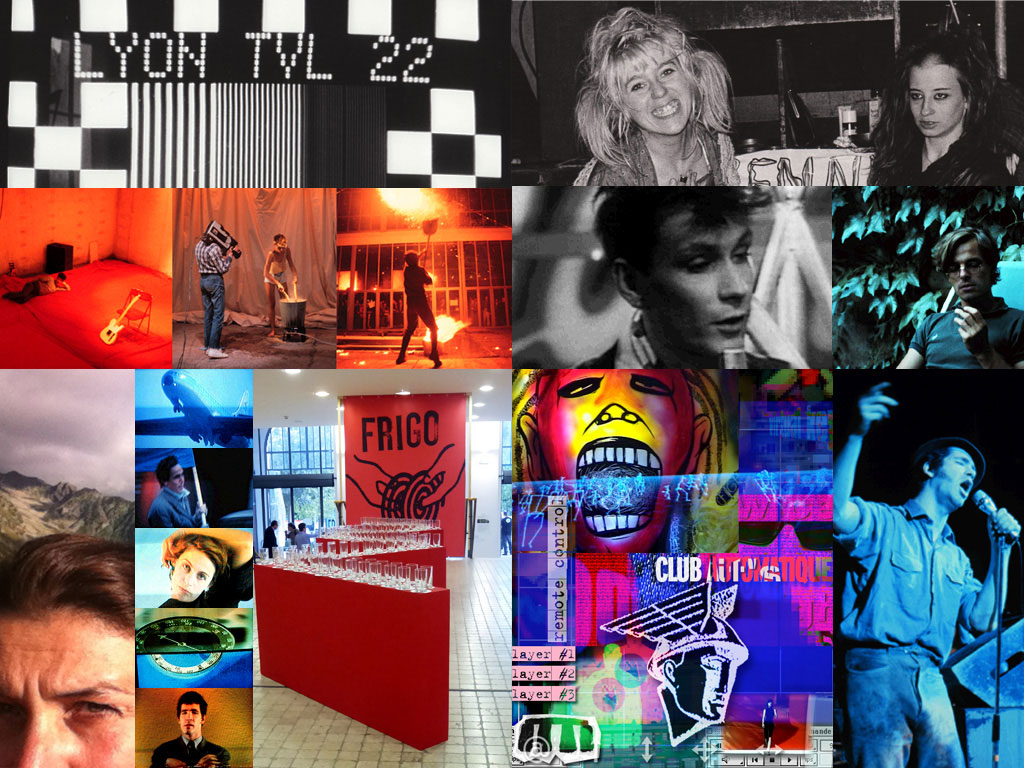 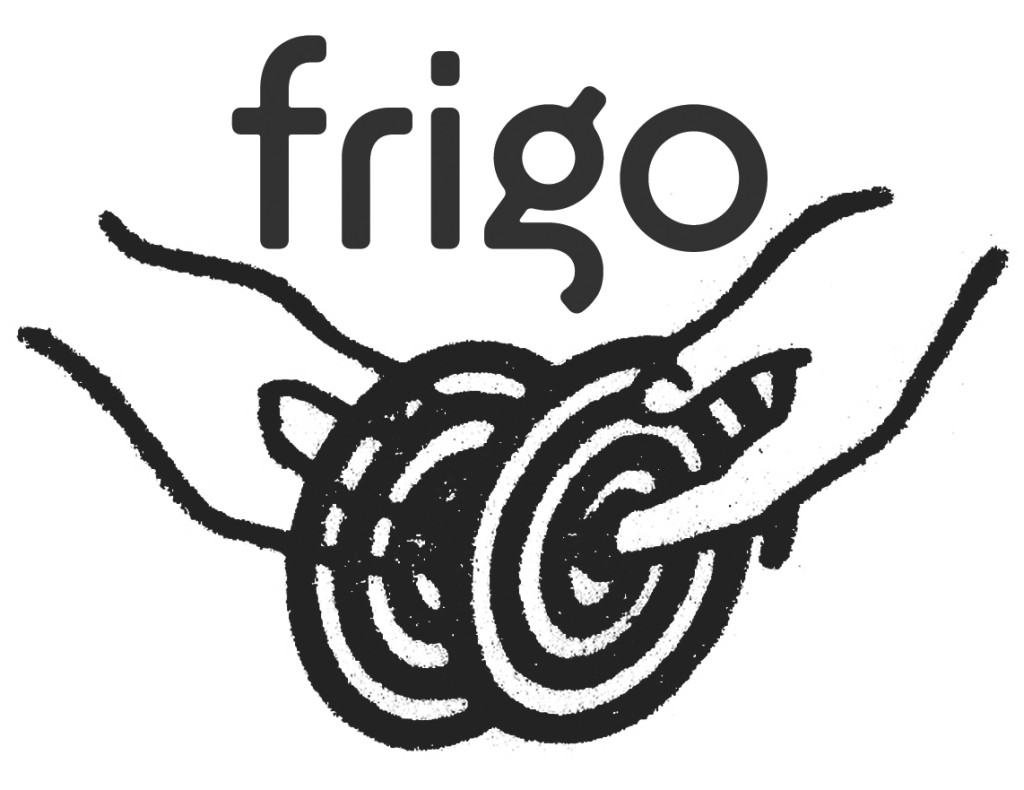 Frigo was an independent artistic experience of the 1980s.

First a place, Frigo, a laboratory of forms, a multimedia space with a video gallery, an exhibition space and a stage, a radio station, artists’ residences, many international collaborations.

A concept, being a full-time “artist”, living and working in the same place, little or no difference between the private and the public

And a group, Bourgey and Couty, then Mike A. Hentz, Alain Garlan, Charles Picq, Rotraut Pape, Christian Vanderborght, Serge Boissat and all the others, about 50 “cultists”, of all nationalities and all sexes

Frigo was a group of individuals with different masks:

Europe Copyright, the distribution of Frigo

Minus Delta T, a performance group 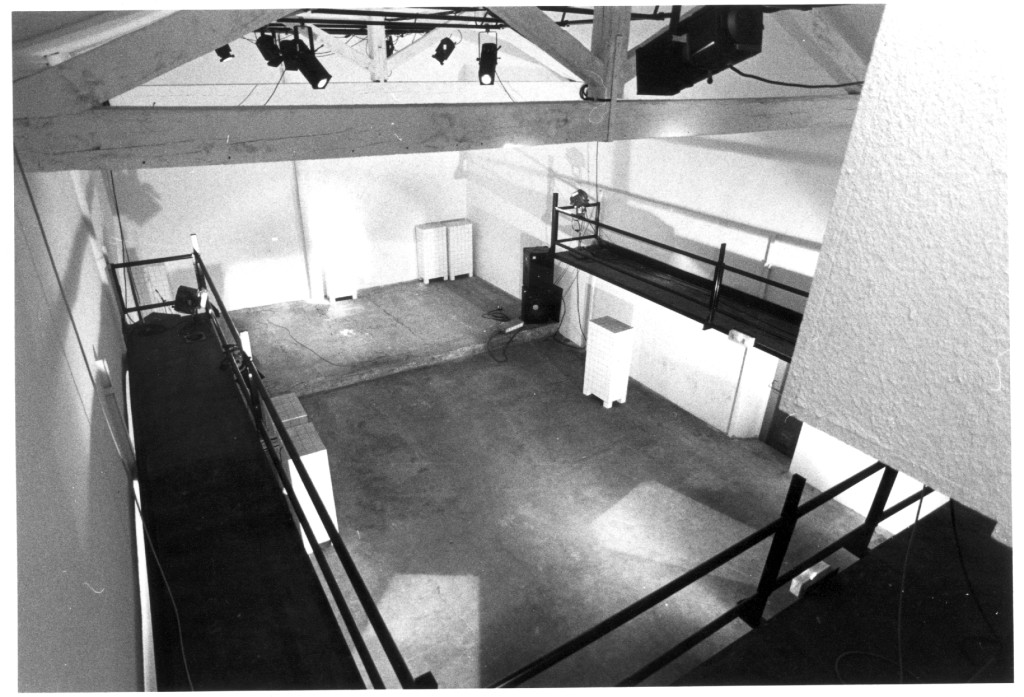 Fait Divers magazine was an underground artistic magazine produced by a “collective” of “volunteers”, of which we were the “graphics” part.

When the gallery in which the Fait Divers magazine was produced was closed to make way for the urban massacre of the slopes of the Croix Rousse, we moved to another working-class area in the centre of Lyon, the Guillotière. We found an old cheese dairy with a huge cold room, offices on a mezzanine, a large cellar and a small adjoining house with a garden, which had been the owner’s residence. We created Faits Divers System completely informally, to continue the experience of the magazine and the gallery.

The space was original enough for us to use its own name: Frigo (the fridge). We continued, however, to call both the place and the concept FDS or Frigo.

FDS evolved, carried along by contrary winds. It became a production company, in line with circumstances, the famous “risk and necessity”.

The main activity of Faits Divers System was graphics work for various cultural institutions, such as national theatres and libraries, but FDS also had a directly commercial clientele (Val d’Isère, ANVAR, etc).

Design, architecture, theatre scenery and plays (robot theatre, TNP, the studios of TF1 and Télé Lyon Métropole, the Bibliobus) were sources of income. The production of films and videos for the City of Lyon and the styling of television channels (KunstKanal, TLM, TF1) allowed us to pay off our U-matic editing console and to experiment with short fictional films.

Going with the times, with Radio Bellevue (introduce in 1981 by Jean-Claude Chuzeville), we had finally found our “loudspeaker”, the propaganda machine of our dreams, which we called the “Frigo sound sculpture”. We were inspired by the programmes of Antonin Artaud on Radio France (ARC). Once again: get out of the cultural ghetto, refuse elitism, reach the masses through the mass media and, above all, finally listen to the music we like.

On 6 July 1981, we broadcast from the attic of the villa (which we had called Bellevue), our first broadcast.

Very soon, Bellevue was broadcasting 24 hours of pure energy live to about 20 000 afficionados. All the cultural and musical underground met in the agora represented by Radio Bellevue, the “free, rock and kultural” radio. A mixture of all styles, brought together by real “hunters and collectors”, an atmosphere of non-stop party, an emotional bioassociation (sciences plus art plus humour). Radio Bellevue was hundreds of encounters: Serge Boissat with his millions of rare records, Olivier Colace with his “big bastard” style, Jacques Bigot and his technical baggage, Marie Girard with her “isolated desolation”, and the others, all the others: Robert Lapassade, Marie-Christine Vernay, Ali from Mali, Olivier and Christine Carrié, Emmanuel from Buretel, Alain Manneval, Rachid Taha, André Serré and Robert Herrero, Françoise Benassy, Olivier Païssé, Yves Legoff, Cyril Deluermoz, Max and Tartine, Agostino and his news, Jean-Claude and his jazz, Arthur and his slippers, Unwholesome baby, Mike and his visitors.

Between 1977 and today, we amassed a huge audiovisual archive on art, dance and modern music. Hundreds of hours of analog and digital video and a large audio archive with Radio Bellevue. These archives are unique, and we almost finished digitizing the historic tapes with the help of the Institut National de l’Audiovisuel Paris (INA), the Centre for Art and Media Karlsruhe (ZKM), the Inter Media Art Institute Düsseldorf (IMAI), mediaartbase, Neuer Berliner Kunstverein and other international foundations and institutions. 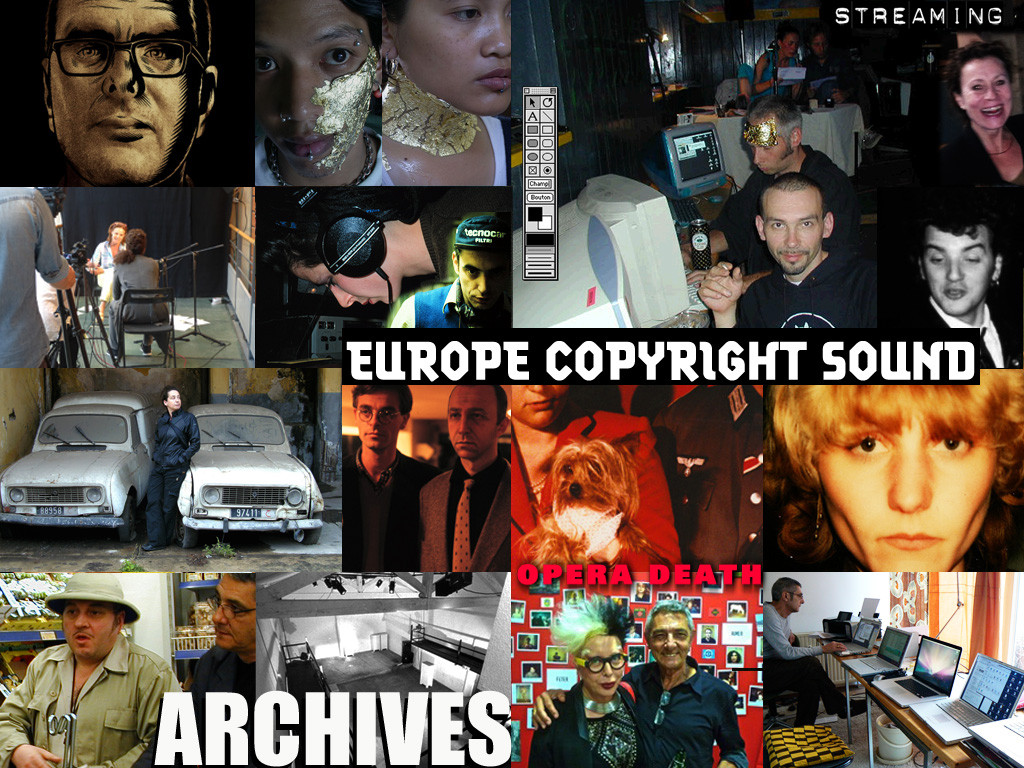 « In 2012, during a presentation at the SCAM, Gilbert Dutertre, who’s in charge of the cultural heritage audiovisual funds of the INA, listened to Anne We when she asked him whether he would be interested in hundreds of hours of video footage from the Eighties art scene.

The INA, he had explained, had created a department that offered artists to digitize work done during those years.

Some appointments later and with the help of the actors of the Frigo adventure,  Anne We., Gérard Bourgey and Gérard Couty set up the execution of this project.

Anne We knew from Gérard Bourgey that these archives were in Berlin, that Gérard Couty had preserved them.

Together, they sorted them, checked their classification and sent them to the INA after signing a contract with them.

Anne We thought that Frigo could perhaps be reborn by reworking these bases and by extending them with a more contemporary vision. She went to find the former members of Frigo to convince them to start again together and they decided to join talents, old and new, not to be a reunion of veterans, who would talk about their war, but to transmit an impulsion, an energy, a style: an alternative elegance. » Anne We. Paris XII-MMXV 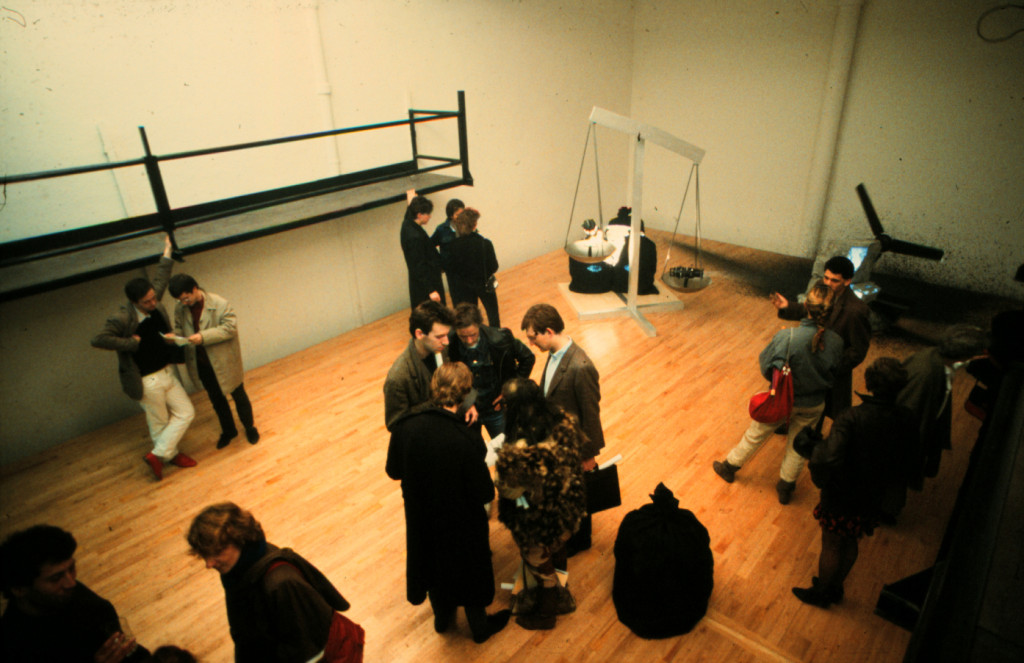 This is  group work. Another truth comes out of a group. Something unexpected that everbody expects. Is individual  art finished? Surely because of the public. As a group, we already have a public. The latest adventure before the next lived by the group,  conscious individuals in a space run on and changing rules.  All weakness and incomprehension. Our creative work is atypical.

The group is not the gang: Adolescence is the time of gangs,  full of false values, power,  malice.  The night of the long knives. Shake off the old past sticking to the skin.

A group consisting of several individuals, each with their brains full of: education, their own work, their own esthetics, their interests in life. They meet to put in the middle of the table all possible  ingredients for  group work.

Afterwards, leave the ingredients and watch them well. Like a chemical reaction, we see things line up, friends who find each other and hold hands,  lonely ones who touch nothing else.  Couples we thought  unstable. Secret lines of a magnetism  which devides the whole into smaller parts. The real work is being able to see that.

The laws that hold together the parts given by their owners undergo the same battles. These parts strengthen each other or get torn apart or float too far to influence each other. The more serious the personal work, the sooner the rules or values will show themselves valid for other alien contents,  like a good software, which understands information brought in many other sources.

Of cause the possibilty to influenceexists, by changing a small detail the whole thing could line up otherwise, by changing big parts, everything may stay the same.

But there are patterns that come back, there is a common interest in different make-ups. The real work is choosing. THE ART OF COMPOSING. Normally it is not one person who sees the first image coming in. The image is in the air,  it created itself,  we expected it, it came from outer space, or – all of a sudden, it appeared. It needs to be seen, to be caught, that´s all.

With the leitmotif in the head each one can start preparing the event.

” Everything you think is dilute; life is a killer ” 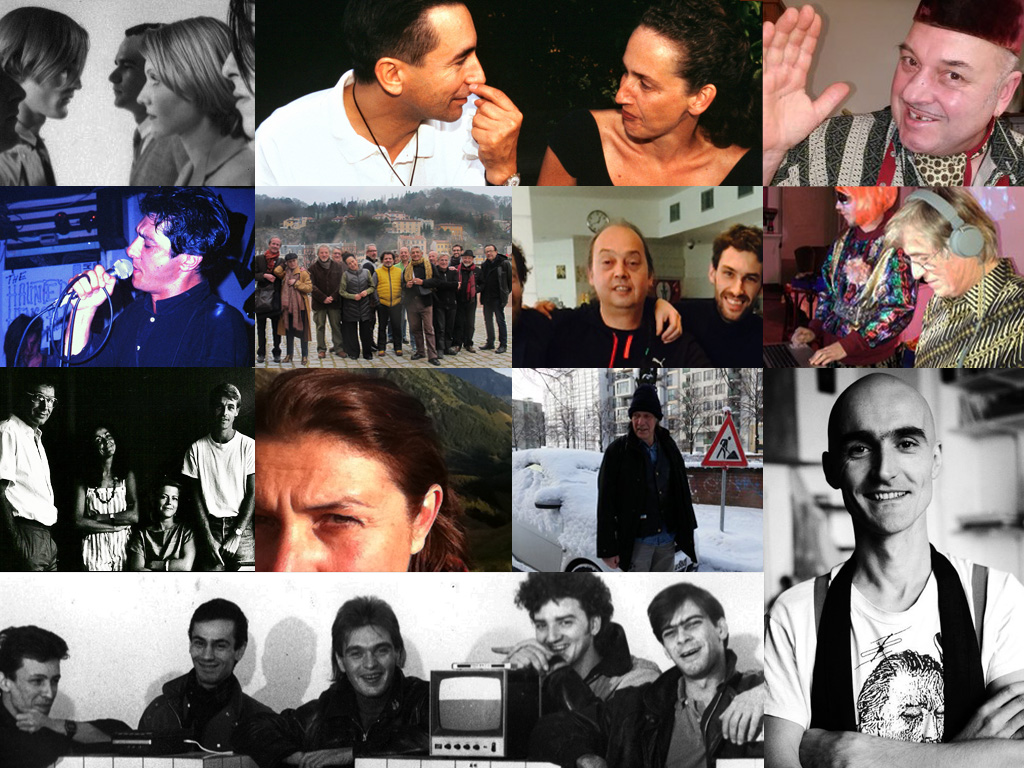